Ductal carcinoma in situ (DCIS) occurs when some of the cells that line a group of milk ducts within your breast have started to become cancer cells. As these cells are contained within the ducts and have not spread into the surrounding breast tissue (in situ), there is very little chance that the cells can spread into the lymph nodes or anywhere else in the body.

This can be considered a very early form of breast cancer. It is sometimes also referred to as ‘pre-cancer’.

Most people with DCIS have no symptoms. DCIS is usually diagnosed on a mammogram where it may be seen as specks of calcium (microcalcification). Occasionally people with DCIS may have a breast lump or nipple discharge. 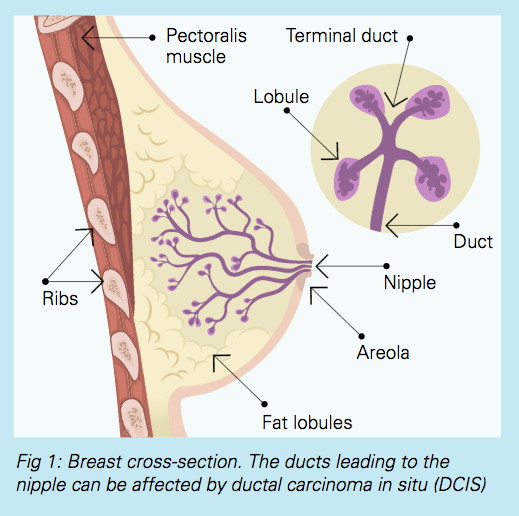 Why should DCIS be treated?

The cells in DCIS are cancer cells. If left untreated, they may spread out of the milk duct into the breast tissue. If this happens, DCIS has become invasive (or infiltrating) cancer, which in turn can spread to lymph nodes or to other parts of the body. 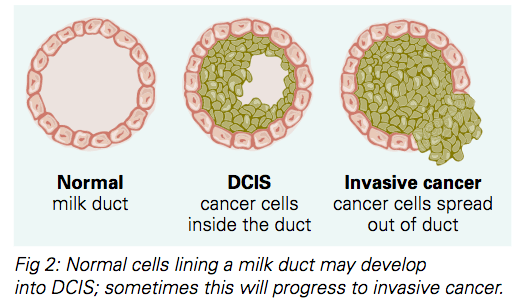 Is it DCIS or invasive cancer?

DCIS is usually diagnosed on a core needle biopsy before surgery. Sometimes, even when the core biopsy shows DCIS, areas of invasive breast cancer are seen when the whole area is removed by a surgeon and examined in detail by a pathologist. In around a quarter of cases, early invasive breast cancer (rather than only DCIS) is found in the final pathology. This is more likely if the area of DCIS is large or if it can be felt as a lump.

The surgeon can discuss the likelihood of invasive breast cancer with you before the operation.

How is DCIS treated?

There are several ways to treat DCIS. Each treatment has advantages and disadvantages.

Under general anaesthetic, the surgeon removes the area of DCIS and a small area of healthy tissue around it (the ‘surgical margin’).

After surgery, radiotherapy (radiation therapy) is given to the breast. This is X-ray treatment that kills cancer cells and significantly reduces the risk of DCIS or invasive breast cancer developing in the remaining breast tissue in the future.

Wide excision alone may be suitable for some women with small areas of ‘low grade’ DCIS. In most cases surgery is combined with a course of radiotherapy as it has been proven that radiotherapy significantly reduces the chances of DCIS or invasive cancer affecting the breast in the future.

Under general anaesthetic, the surgeon removes the whole breast and usually the nipple. This is sometimes the only treatment option for large areas of DCIS or cases where small clusters of DCIS are scattered through the breast.

Breast reconstruction can be done immediately (at the same time as the mastectomy) or delayed (in separate operation months or years later). Breast reconstruction may be performed by a breast cancer surgeon or by a plastic surgeon, or as a joint procedure by both surgeons. This will depend on your individual situation and the type of reconstruction that you choose.

In some mastectomy cases, the nipple can be preserved as long as all of the breast tissue and ducts behind it are removed. This may be possible if the DCIS is some distance away from the nipple. This is also only possible for some breast and body shapes. The surgeon will discuss this if it is a safe option for you.

Nipple sparing is only considered when breast reconstruction is being performed at the same time as mastectomy. (For more information see the brochure Breast Reconstruction.)

Hormone-blocking therapies such as tamoxifen and aromatase inhibitors are tablets that are often used in the treatment of invasive breast cancer. They can also reduce the chances of DCIS recurring in those people who have breast conservation rather than a mastectomy. However, with modern surgery and radiotherapy, the risk of recurrence is extremely low, so it is unclear just how much additional benefit these tablets have. Your doctor can talk to you about the potential benefits and risks in your situation.

Hormonal-blocking therapies can be used with surgery and radiotherapy. They are used in combination with these treatments rather than as a replacement. (For more information see Hormonal Therapies for Breast Cancer.)

However, this can have side effects. Further research is investigating the role of hormonal therapies (including aromatase inhibitors in post-menopausal women) for DCIS. Your doctor can talk to you about the potential benefits and risks in your situation. Hormonal therapies can be used with surgery and radiotherapy. They are used in combination with these treatments rather than as a replacement. (For more information see the brochure Hormonal Therapies for Breast Cancer.)

Most women with invasive breast cancer have surgery to remove some of the lymph glands from their axilla (armpit). We know that if invasive cancer spreads, it is likely to spread to the lymph glands first, so these are removed for testing.

In DCIS, the cancer cells are contained in the milk ducts and do not invade into the breast tissue and spread to the lymph glands. It is therefore not usually necessary to remove the glands. However, if there is a large area of DCIS or lots of small clusters of DCIS, the chances of finding invasive cancer in the DCIS is higher and your surgeon may recommend sentinel node biopsy of the lymph glands. When mastectomy is recommended for DCIS, a sentinel node biopsy is frequently recommended. (For more information see the brochure Sentinel Node Biopsy.)

DCIS is not an emergency. You have time to consider your options carefully and to make a decision in your own time. Ask for a second opinion if you are unsure about what to do.

Who can I speak to?

An experienced team is available to help you. Many women find treatment for DCIS difficult to comprehend (and sometimes overwhelming) as they are facing treatments similar to women with invasive breast cancer, yet they have an early stage breast change, often without symptoms. Please talk to your doctor, nurse or radiation therapist about anything that is worrying you.