What are lymph nodes?

Why do lymph nodes need to be removed? 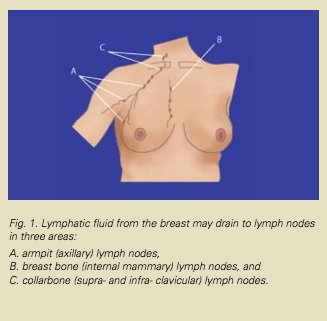 How can the lymph nodes be sampled?

Axillary clearance has some possible side effects. These include:

What is a sentinel node biopsy?

Sentinel node biopsy is a technique that has evolved over recent years and it is now the usual way to assess the lymph nodes in women with early breast cancer.

It aims to avoid some of the side effects of axillary clearance by removing fewer glands. Removing only the sentinel or ‘guardian’ nodes lessens the likelihood of complications and in most cases still provides the necessary information about the cancer. There are still some situations when axillary clearance is needed.

If cancer cells are found in the sentinel node then axillary clearance is sometimes recommended.

The sentinel node/s are the lymph nodes that fluid from the breast ‘drains’ to first. Usually there are between one and three sentinel nodes. It is thought that if breast cancer cells were to escape into the lymphatic system, they would travel to the sentinel node/s before moving on to other nodes and the rest of the body.

Sentinel lymph node biopsy is a technique that aims to identify and remove just the sentinel node/s and no others.

How is sentinel node biopsy performed?

The sentinel node is identified, or ‘mapped’ using a combination of techniques. These are:

These techniques produce a ‘road map’ to help the surgeon find the sentinel node for removal during the operation. 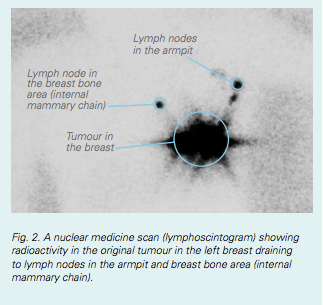 Lymphatic mapping is performed the day before, or a few hours before surgery. It is usually performed in a nuclear medicine or X-ray department. A small amount of radioactive material is injected around the cancer or under the nipple. The radioactive tracer travels from the cancer site to the sentinel node, along the same lymphatic channels that cancer cells could travel. This can take a few minutes or a couple of hours. A series of scans is taken to show where the sentinel node is located.

The injection of tracer makes the sentinel node radioactive so it can be found by the surgeon with the use of a gamma probe (a type of hand-held Geiger counter) during the operation (Fig. 4). The dose of radiation is very small and will cause you no harm. 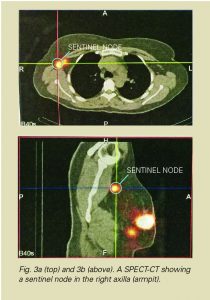 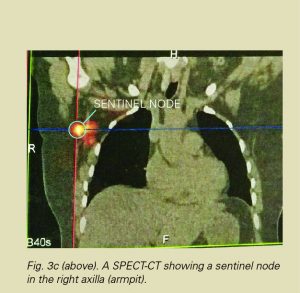 The blue dye test is sometimes performed at the beginning of the operation. When you are asleep, a small amount of blue dye is injected around the nipple or the cancer. The dye quickly moves into the lymphatic channels and turns the sentinel node blue, again helping the surgeon to locate the sentinel node. 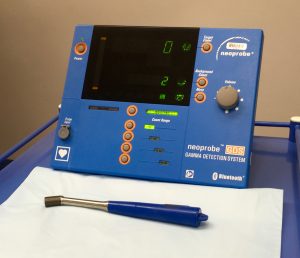 This combination of blue dye and radioactive material allows a sentinel lymph node to be identified in over 98% of cases.

Depending on the situation, your surgeon may choose to use only blue dye or only lymphoscintigraphy rather than the combination.

Once the sentinel node is found, it is removed and sent for examination by a pathologist.

The pathologist, knowing this to be an important node, can perform special tests to identify even the smallest cancer deposits if they are present.

It is important to understand that a lymph node that is successfully ‘mapped’ (i.e., one that shows up on the nuclear medicine or blue dye tests) does not necessarily contain cancer cells. Rather, it is the first lymph node likely to be affected if cancer cells have escaped into the lymphatic system and the one that is examined most thoroughly by the pathologist.

What are the advantages of sentinel node biopsy?

Most women who have breast conserving surgery and sentinel node biopsy have a shorter hospital stay, a smaller scar and a quicker recovery time than women who have all the lymph nodes removed from under their arm (axillary clearance).

What are the possible side effects of sentinel node biopsy?

What is a false-negative result?

What if the sentinel node biopsy is ‘positive?’

If the pathologist sees cancer cells in a sentinel node, the biopsy is said to be ‘positive’. If this happens your surgeon might recommend that you have further surgery to remove all of the glands under your arm (full axillary clearance) or have radiotherapy to the glands. In other cases, no further treatment will be needed.

When is sentinel node biopsy not recommended?

Some patients with breast cancer are still best treated with complete axillary clearance rather than with sentinel node biopsy. Axillary clearance is usually recommended when the cancer is found in the lymph glands on imaging and biopsy before surgery.

In some of these cases, sentinel node biopsy is performed at the time of full axillary clearance. This is to ensure that if the cancer ‘drains’ to lymph nodes near the collarbone and breast bone areas, these may be sampled.

[This information guide is also available PDF format to download.]