[This information guide is also available in PDF for download.]

A breast biopsy is a test that removes cells or tissue from the breast so that it can be examined by a pathologist under a microscope. A biopsy gives you and your doctor important information about your breast tissue, which helps to make a diagnosis and plan treatment. In some cases, a biopsy may be used to completely remove small breast abnormalities.

There are several types of biopsy that can be used to take a sample of cells and or tissue from the breast. These biopsies include:

These procedures all differ slightly in the way they are done and in the information they can give.

Fine needle biopsy is a quick and simple test. It removes a collection of cells from the breast with a tiny needle in much the same way as a blood sample is taken. These cells are examined by a pathologist under a microscope.

What are the advantages of fine needle biopsy.

What are the limitations of the fine needle biopsy?

How is a fine needle biopsy done?

The procedure may need to be done several times to get enough cells. If there is a lump that is felt easily, the needle can be guided into the lump by feel. If the breast tissue that is being tested cannot be felt easily, the biopsy needle is guided accurately into the area with the help of an ultrasound or mammogram.

Most people describe a fine needle biopsy as uncomfortable but not painful. Local anesthetic (an injection to numb part of the breast) may or may not be need for this procedure.
Cyst aspiration is a procedure to remove fluid from a breast cyst. It is similar to a fine needle biopsy. Large tender cysts may be aspirated to reduce pain or small cysts may be aspirated to get a sample for testing.

Cyst fluid may or may not be sent to a pathologist to be examined under a microscope, depending on the individual circumstances. Your doctor will be able to tell you after the procedure if a sample has been sent for testing.

Core Biopsy (also called core needle biopsy or CNB) is a test removes tiny pieces of tissue from the breast for examination by a pathologist. The test is similar to a fine needle biopsy. A specialised biopsy needle is used to take the sample. The test is always done under local anaesthetic.

What are the advantages of core biopsy?

What are the limitations of core biopsy?

How is a core biopsy done?

Most people describe a core biopsy as uncomfortable, but not painful. The local anaesthetic is extremely effective in numbing the biopsy area. You will feel a pushing sensation as the samples are taken, but it should not be painful. If you feel pain, more anaesthetic can be used.

These procedures may use computer technology called stereotaxis to accurately guide the biopsy needle to the right position. This is needed in cases where an abnormal area can be seen on a mammogram but cannot be felt clinically or seen on ultrasound. This may be an area of microcalcification or a density or ‘shadow’ on a mammogram. VACB procedures can also be done under the guidance of ultrasound.

What are the advantages of VACB?

What are the limitations of VACB? 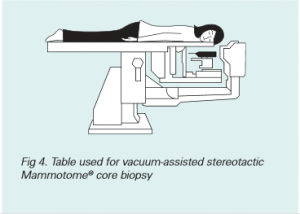 How is a stereotactic Mammotome® VACB done?

If the abnormal area is very small, most or all of it may be removed during a VACB procedure. If this happens, the doctor may place a tiny metal clip in the breast where the sample was taken from. This clip allows the area to be seen on future mammograms and to be found again easily if more treatment is needed.The clip can safely be left in the breast as it is very small and does not cause any irritation.

During a VACB procedure, there will be some technical discussion between the doctor and the radiographer performing the biopsy. This communication is an important part of planning an accurate biopsy of an area which cannot be felt and can only be seen on a mammogram.

How is a stereotactic Vacora® VACB done?

The procedure is similar to Mammotome® biopsy except it is done while you are sitting upright.

Some women find the position lying face down or sitting upright uncomfortable, and some find the compression of the breast uncomfortable. Remember, much less compression is used for the biopsy than for a mammogram. The breast is gently compressed for at least 20 minutes, and up to one hour. The injection of local anaesthetic stings a little at first, but numbs the area very quickly. You may feel a sense of pressure or pushing during the procedure; this is normal and should not be painful.

Mammotome® or Vacora® biopsies can also be done under the guidance of ultrasound rather than mammogram. These procedures are similar to stereotactic biopsy except that you will lie on your back rather than face down, and no compression or X-rays are used.

What are the side effects of breast biopsies?

Breast biopsies usually do not have complications.

Possible side effects are the same for all types of breast biopsy. How often these side effects happen and how severe they may be depends on the type of biopsy. In general, side effects are less common and are less significant with fine needle biopsy, cyst aspiration and core biopsy than they are with Mammotome® or Vacora® VACB.

It is important that you tell your doctor before the procedure if you are on any medications (such as Warfarin, aspirin, and anti-inflammatory tablets) which make you bleed or bruise more easily than normal.

Tell your doctor before procedure if you:

Tell your doctor before the procedure if you:

Who will perform the biopsy?

The breast biopsy will be performed by a doctor. The doctor may be a radiologist, surgeon, breast physician or pathologist. A pathology scientist, radiographer, and or a nurse may also be there to help.

When will I get the results?

If you have any problems after your breast biopsy, contact the Breast Centre or your GP. You may also go to the Emergency Department at your closest hospital if you are concerned at any stage or if you need treatment after hours.

[This information guide is also available in PDF for download.]